October has arrived! Only three more months of this year left…we hope that they’ll be good ones.

We continue to pawray for all those affected so badly by nasty evil Ian. We hope all will be safe, and if your power is out, we hope that will be restored in due time. And we sure hope that the damages incurred will be fixable.

Here’s a  list of things October in the Blogosphere:

Well, since it is October we also have some thoughts about that…our unfurbro-the-elder has his birthday this month, as well as our auntie. Two of our angel kitties had their BD’s in October as well. October is the month wherein Halloween lives, though that is one day the petcretary truly doesn’t like. The Protestant religion has its roots in October as well.(Reformation Day)

Our Oma passed away in this month…so its kind of a bittersweet day on Oct first for our petcretary.

But on a happier note, October is Adopt a Shelter Dog Month! Oh, MY! We qualify for that, since both of us pups were adopted from two local shelters.

We are grateful that we were adopted…it saved our lives. Adopting pups from shelters, even the no kill ones, gives each pup a new lease on life, and a home/family to call their own, Yes, Please!

All you former shelter pups, give your peeps an extra wag and a ton of sloppy wet kisses! We will do that for sure:) 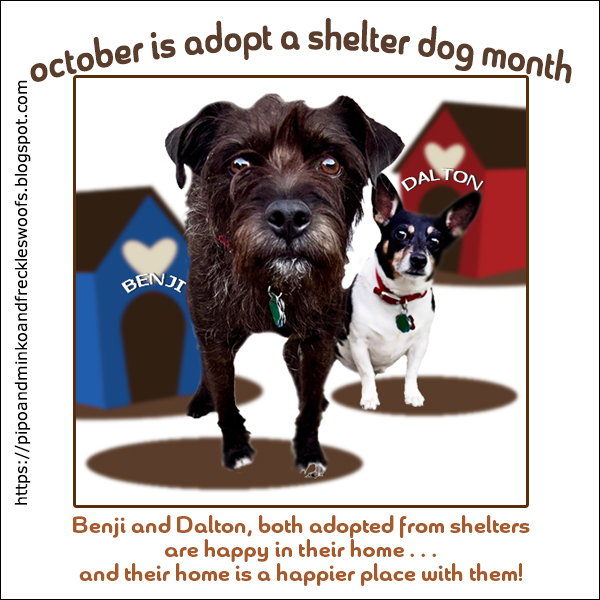 I, Dalton, came from a shelter here, known as ROAR, they even use the same vet as we do!

I Benji,came from The Humane Society of Southwest Michigan.

Both of us were ‘pulled’ from high kill shelters in Texas before we were in the local ones. Why do they call those ‘shelters’ anyways if they euthanize so many sweet furry ones?? Phooey. We are the lucky ones.

And October First is also National Black Dog Day…I Benji am mostly black, BOL! Looks like Hailey sports a similar white patch on her neck as I do! BOL! 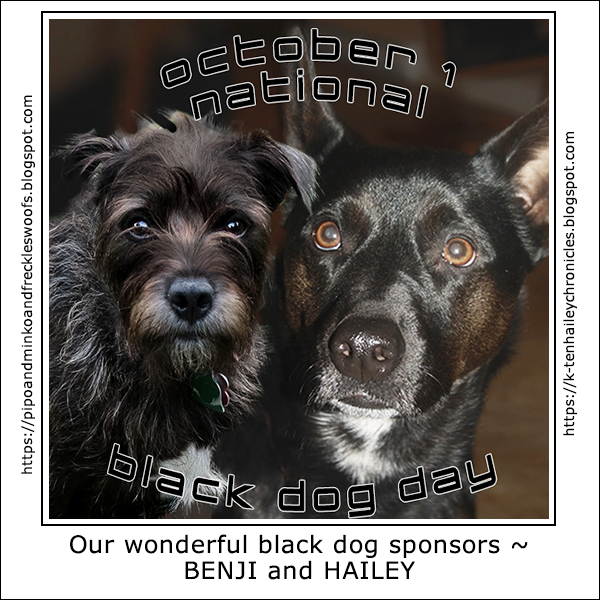 Thanks, Ann, from Zoolatry, for using us in the badges for these special days/events.

5 thoughts on “Its October”

The Blessing of Animal Companions

Reflections on living with and caring for animals

Little Miss Titch & The adventures of a Gossip Bunny